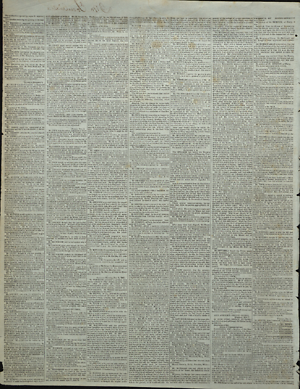 Summary of Legislative Debate on Petition of Norman H. Purple, 4 December 18401
Mr. PECK from the select committee to whom was referred the Petition of N. H. Purple claiming the seat in the House now occupied by Mr. Phelps from Peoria county, presented a Report, which was read.2
The report after going into an examination of the evidence offered concludes by stating that Mr. Purple appeared to the committee entitled to the seat.
Mr. HARDIN from the same committee presented a counter report from the minority.3
Mr. LINCOLN moved that the reports be referred to a committee of the whole House, and that the House do now resolve itself into committee of the whole on the subject.
Mr. KITCHELL hoped the House would first take up the bill relating to internal improvements.
Mr. PECK thought no measure more important than the present. He hoped the House would go into Committee forthwith, and decide upon this question.
Mr. LINCOLN considered the question of the higest[highest] importance, whether an individual had a right to sit in this House or not. The course he should propose would be to take up the evidence and decide upon the evidence and decide upon the facts seriatim:
Mr. DODGE could see no reason for delay. He hoped the question would be taken up.
Mr. CAVARLY approved of the course proposed by the member from Sangamon.
Mr. GRIDLEY did not fear the result: though the testimony was voluminous, it had been arranged in reference to each vote, he hoped it would be taken up and each vote decided upon according to the evidence singly.
Mr. DRUMMOND was opposed to taking up: he wished for time to investigate the matter thoroughly. The House would sit as Jurors and as Judges in a judicial capacity, and ought therefore to have an opportunity to examine and understand the evidence. It could not be properly decided on the spur of the moment, and in heat of debate. He wished for time calmly and dispassionately to examine into the evidence before being called upon to decide as a judge or as a juror; for this purpose he hoped that the whole evidence as well as the reports made by the committee would be printed, to afford the House time and opportunity to examine into this most important subject.
Mr. LINCOLN thought that the question had better be gone into now. In courts of law Jurors were required to decide on evidence without previous study or examination. They were required to know nothing of the subject untill the evidence was laid before them for their immediate decision. He thought that the heat of party would be augmented by delay.
The Speaker called Mr. L. to order as being irrelevant no mention had been made of party-heat.—
Mr. DRUMMOND said he had spoken only of debate.
Mr. LINCOLN asked what caused the heat, if it was not party? Mr. L. concluded by urging that the question would be decided now better than hereafter, and he thought with less heat and excitement.
Mr. DRUMMOND replied: he disclaimed all party feeling, his object was to have time to examine the subject fairly.
Mr. PECK moved that the House do now go into committee of the whole, which motion after some animated discussion between Messrs Peck, Hardin and Kitchell was agreed to.
Mr. WEBB thought the papers ought to be printed and time allowed for their examination. He would move to reconsider the vote.
The motion to reconsider after some debate in which Messrs Bently, Ormsbee, Webb, Hardin and Minshall spoke in favor and Messrs Murphy of Perry, Dodge. Carpenter, English and Henderson against the motion was put and lost.
Mr. WOODSON moved that the reports on the contested election be made the order of the day for Monday next when the House would be able to attend better to the evidence by taking notes, sitting in the state-house
After a further debate on this motion in which Messrs Kitchell, Dougherty, McClernand, Lincoln, Drummond and Parsons participated, the motion was lost and the House decided to go into committee of the whole forthwith, by Yeas 48, Nays not counted.4
1The Sangamo Journal also published a version of this debate. The Journal’s summary is less adequate than that offered by the Register, with the exception of Lincoln’s retort to Drummond and coverage of the respective majority and minority reports.
2On November 24, 1840, Ebenezer Peck in the House of Representatives presented the petition of Purple. In the state election of August 1840, Phelps, the Whig candidate, had defeated Purple, the Democrat, by a meager seven votes in the race to represent Peoria County, and Purple had contested the canvass, claiming that fifteen voters had cast illegal ballots for Phelps, whereas he had only received eight illegal votes. Purple also purported that election officials had rejected two of his supporters at the polls without cause. On November 25, the House appointed a select committee to investigate Purple’s contentions. This select committee had five Democrats and four Whigs.
Illinois House Journal. 1840. 12th G. A., 7, 8, 59-61; Theodore C. Pease, ed., Illinois Election Returns, 1818-1848, vol. 18 of Collections of the Illinois State Historical Library (Springfield: Illinois State Historical Library, 1923), 348.
3Partisanship divided the select committee, and resulted in majority and minority reports. Peck presented the Democratic majority report. The report concluded with a resolution declaring Purple the winner of the election. Hardin presented the Whig minority report, which concluded that Phelps had won the seat.
Illinois House Journal. 1840. 12th G. A., 59-67.
4Both reports were referred to the Committee of the Whole. On December 21, the House adopted a resolution affirming that Phelps was rightly entitled to the seat. The House adopted the resolution by a vote of 48 yeas to 33 nays, with Lincoln voting yea.
Illinois House Journal. 1840. 12th G. A., 7, 8, 9-10, 59-67, 90, 93, 131, 132-34, 138-39.