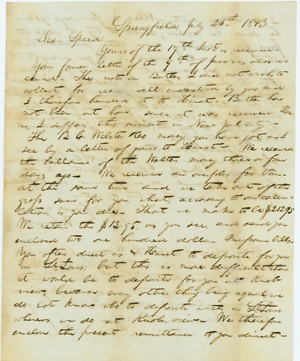 Abraham Lincoln to Joshua F. Speed, 26 July 18431
Springfield, July 26th 1843.Dear Speed:
Yours of the 17th Inst is received– Your former letter of the 9th of June was also received–2 The note on Butler, I did not wish to collect, for reasons well understood by you; and I therefore handed it to Hurst–3 Butler has not been at home since it was received. He is, I suppose, this moment in New York city–
The B. C. Webster & Co money, you have got, as I see by a letter of yours to Hurst–4 We received the ballance of the Walters money three or four days ago– We received an overplus for Van– at the same time, and we take out of the gross sum for you, what, according to our calculation, is your due–5 That we make to be $212.95 We retain the $12.95, as you see, and send you enclosed two one hundred dollar Missouri bills– You often direct us & Hurst to deposite for you in St Louis; but this is more difficult than it would be to deposite for you at Knob view; because, every other thing being equal, we do not know who to deposite with in St Louis whereas we do at Knob-view–6 We therefore enclose the present remittance to you direct–
<Page 2>
I was talking with Allen a few days ago; and he said he would ^like^ still to try to sell the farm for something more than your debt; but that he would deed it to you outright at any time, you desired it, provided you would take it, and discharge his debt– You know that under the deed of trust you may sell it for what it will bring, and hold him bound for the ballance, provided it does ^not^ sell for enough to pay the ^whole^ debt–7 I told him I would write you–
We shall look with impatience for your visit this fall– Your Fanny can not be more anxious to see my Molly than the latter is to see her; nor as much so as I am– Don't fail to come– We are but two, as yet–8
Your friend as everA. LincolnP. S. Since I wrote the above, I have seen John Irwin, who starts to the East within a week from now, and by whom I have concluded to send the money in preference to enclosing it– He will leave it with your brother James in the city– A. L.
<Page 3>
<Page 4>
SPRINGFIELD Ill
JUL[July] [27?]Mr Joshua F. SpeedSalina9Jefferson Co.Illinois–Ky
[docketing]
07/26/1843
July 26– 43–[1843]
[docketing]
c
[docketing]
c
[docketing]
18
1Abraham Lincoln wrote and signed the letter. He also authored the address on the back page, which was folded to create an envelope for mailing.
2Joshua F. Speed’s letters to Lincoln have not been located. In Springfield, Speed had been a partner in the mercantile firm of James Bell & Company. In January 1841, Speed sold his share in the company and his stock of goods to Charles R. Hurst. Speed hired Logan & Lincoln to collect the outstanding debts owed to him by Illinois residents.
Daniel W. Stowell et al., eds., Papers of Abraham Lincoln: Legal Documents and Cases (Charlottesville: University of Virginia Press, 2008), 1:251-52; Joshua F. Speed to William H. Herndon, 17 September 1866, Douglas L. Wilson and Rodney O. Davis, eds., Herndon’s Informants: Letters, Interviews, and Statements about Abraham Lincoln (Urbana: University of Illinois Press, 1998), 342. For more correspondence related to Lincoln’s collection of debts due to Speed, see also Abraham Lincoln to Joshua F. Speed; Abraham Lincoln to Joshua F. Speed; Abraham Lincoln to Joshua F. Speed.
3Hurst had purchased Speed’s store and stock of merchandise from him, and apparently was also involved in handling some of Speed’s financial affairs.
Abraham Lincoln to Joshua F. Speed.
4Lincoln collected a debt due to Speed from B.C. Webster & Co. without initiating a lawsuit.
“Lincoln collected debts for Speed,” Martha L. Benner and Cullom Davis et al., eds., The Law Practice of Abraham Lincoln: Complete Documentary Edition, 2d edition (Springfield: Illinois Historic Preservation Agency, 2009), http://www.lawpracticeofabrahamlincoln.org/Details.aspx?case=141423; Abraham Lincoln to Joshua F. Speed.
5Peter Van Bergen had sold three lots in Springfield, Illinois, to William Walters for $1,000, and Walters paid with a promissory note secured by a mortgage on the property. Van Bergen then assigned the promissory note to Speed. At the November 1842 term of the Sangamon County Circuit Court, Logan & Lincoln brought suit against Walters to foreclose the mortgage. Walters failed to appear, and the court ruled for VanBergen and Speed, awarding $1,155 in damages. Walters failed to pay the judgment, and Speed purchased the lots at auction. Walters later redeemed the lots by paying Lincoln, who kept a record and forwarded the payments to Speed.
VanBergen for use of Speed v. Walters et al., Martha L. Benner and Cullom Davis et al., eds., The Law Practice of Abraham Lincoln: Complete Documentary Edition, http://www.lawpracticeofabrahamlincoln.org/Details.aspx?case=138194; Abraham Lincoln to Joshua F. Speed.
6No town named Knob View could be identified in Kentucky. However, the “knobs” region of the state, characterized by isolated conical hills, arches along the southern border of the Bluegrass region with its western end lying near Louisville. As Speed lived outside Louisville, it is likely that there was a place in that region known as “Knob View.”
Robert M. Rennick, Kentucky Place Names (Lexington: University Press of Kentucky, 1984), 162; Joe Wayne Roberts, “Knobs,” John E. Kleber, ed., Encyclopedia of Louisville (Lexington: University Press of Kentucky, 2001), 486.
7Robert Allen owed James Bell & Co. $900, which the company assigned to Speed. Allen and his wife, Jane, deeded 200 acres of land to Lincoln as security for the debt.
“Lincoln held trust deed as agent for Speed,” Martha L. Benner and Cullom Davis et al., eds., The Law Practice of Abraham Lincoln: Complete Documentary Edition, http://www.lawpracticeofabrahamlincoln.org/Details.aspx?case=141232.
8Lincoln is referring to the impending birth of his and Mary’s first child, Robert Todd Lincoln, who would be born on August 1, 1843.
9No town called “Salina” could be identified in Jefferson Co., Kentucky.