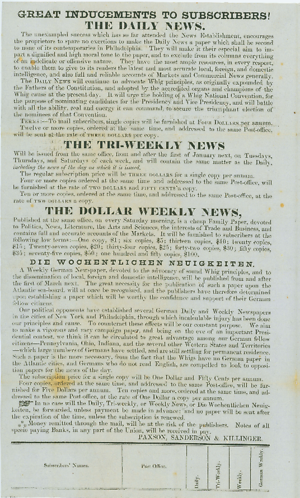 Circular of Edward M. Paxson, John P. Sanderson, and John W. Killinger to Henry E. Dummer, [16 December 1847]1
GREAT INDUCEMENTS TO SUBSCRIBERS!
THE DAILY NEWS.
The unexampled success which has so far attended the News Establishment, encourages the proprietors to spare no exertions to make the Daily News a paper which shall be second to none of its contemporaries in Philadelphia. They will make it their especial aim to impart a dignified and high moral tone to the paper, and to exclude from its columns everything of an indelicate or offensive nature. They have the most ample resources, in every respect, to enable them to give to its readers the latest and most accurate local, foreign, and domestic intelligence, and also full and reliable accounts of Markets and Commercial News generally.
The Daily News will continue to advocate Whig principles, as originally expounded by the Fathers of the Constitution, and adopted by the accredited organs and champions of the Whig cause at the present day. It will urge the holding of a Whig National Convention, for the purpose of nominating candidates for the Presidency and Vice Presidency, and will battle with all the ability, zeal and energy it can command, to secure the triumphant election of the nominees of that Convention.
Terms:—To mail subscribers, single copies will be furnished at Four Dollars per annum.
Twelve or more copies, ordered at the same time, and addressed to the same Post-office, will be sent at the rate of three dollars per copy.
THE TRI-WEEKLY NEWS
Will be issued from the same office, from and after the first of January next, on Tuesdays, Thursdays, and Saturdays of each week, and will contain the same matter as the Daily, including the news of the day on which it is issued.
The regular subscription price will be three dollars for a single copy per annum.
Four or more copies ordered at the same time and addressed to the same Post-office, will be furnished at the rate of two dollars and fifty cents a copy.
Ten or more copies, ordered at the same time, and addressed to the same Post-office, at the rate of two dollars a copy.
THE DOLLAR WEEKLY NEWS,
Published at the same office, on every Saturday morning, is a cheap Family Paper, devoted to Politics, News, Literature, the Arts and Sciences, the interests of Trade and Business, and contains full and accurate accounts of the Markets. It will be furnished to subscribers at the following low terms:–One copy, $1; six copies, $5; thirteen copies, $10; twenty copies, $15; Twenty-seven copies, $20; thirty-four copies, $25; forty-two copies, $30; fifty copies, $35; seventy-five copies, $50; one hundred and fifty copies, $100.
DIE WOCHENTLICHEN NEUIGKEITEN.
A Weekly German Newspaper, devoted to the advocacy of sound Whig principles, and to the dissemination of local, foreign and domestic intelligence, will be published from and after the first of March next. The great necessity for the publication of such a paper upon the Atlantic sea-board, will at once be recognized, and the publishers have therefore determined upon establishing a paper which will be worthy the confidence and support of their German fellow citizens.
Our political opponents have established several German Daily and Weekly Newspapers in the cities of New York and Philadelphia, through which incalculable injury has been done our principles and cause. To counteract these effects will be our constant purpose. We aim to make a vigorous and racy campaign paper, and being on the eve of an important Presidential contest, we think it can be circulated to great advantage among our German fellow citizens—Pennsylvania, Ohio, Indiana, and the several other Western States and Territories—which large numbers of Germans have settled, and are still settling for permanent residence. Such a paper is the more necessary, from the fact that the Whigs have no German paper in the Atlantic cities, and Germans who do not read English, are compelled to look to opposition papers for the news of the day.
The subscription price for a single copy will be One Dollar and Fifty Cents per annum.
Four copies, ordered at the same time, and addressed to the same Post-office, will be furnished for Five Dollars per annum. Ten copies and more, ordered at the same time, and addressed to the same Post-office, at the rate of One Dollar a copy per annum.
In no case will the Daily, Tri-weekly, or Weekly News, or Die Wochentlichen Neuigkeiten, be forwarded, unless payment be made in advance; and no paper will be sent after the expiration of the time, unless the subscription is renewed.
Money remitted through the mail, will be at the risk of the publishers. Notes of all specie paying Banks, in any part of the Union, will be received in pay.
PAXSON, SANDERSON & KILLINGER.
<Page 2>
News Buildings, N. E.[Northeast] corner of Third & Chestnut Sts.[Streets]
Philadelphia, 184ToSir:—
Knowing you to be an active Whig, we take the liberty of sending you our Prospectuses, and shall feel ourselves under great obligations to you, if you will interest yourself in securing us a list of names in your neighbourhood. The cause in which we are engaged demands our best exertions, and we know of no method better calculated to advance it, than cheap and vigorous papers. If at any time we can reciprocate your favor, we shall cheerfully do so.
Yours, respectfully,EDWARD M. PAXSON,JOHN P. SANDERSON,JOHN W. KILLINGER.
<Page 3>
WASHINGTON DC
DEC[December] 16Free. A Lincoln M C.[Member of Congress]Henry E Dummer Esq[Esquire]BeardstownIllinoise
1As a member of Congress, Abraham Lincoln franked this printed circular by writing “Free” and signing his name on the third page, which was folded to create an envelope for mailing. An unknown person addressed the circular to Henry E. Dummer.
2Text in the last four columns is printed vertically from bottom to top.