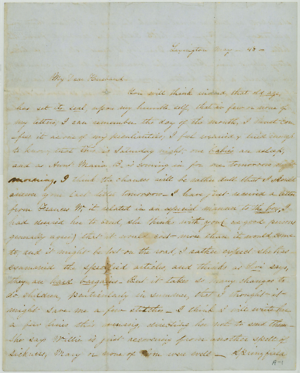 Mary Lincoln to Abraham Lincoln, May 18481
Lexington May– 48–2My Dear Husband–
You will think indeed, that old age has set its seal, upon my humble self, that in few or none of my letters, I can remember the day of the month, I must confess it as one of my peculiarities; I feel wearied & tired enough to know, that this is Saturday night, our babies are asleep, and as Aunt Maria B– is coming in for me tomorrow night, morning, I think the chances will be rather dull that I should answer your last letter tomorrow–. I have just received a letter from Frances W, it related in an especial manner to the box. I had desired her to send, she thinks with you (as good persons general agree) that it would cost more than it would come to, and it might be lost on the road, I rather expect she has examined the specified articles, and thinks as Levi says, they are hard bargains– But it takes so many changes to do children, particularly in summer, that I thought it might save me a few stitches– I think I will write her a few lines this evening, directing her not to send them– She says Willie is just recovering from another spell of sickness, Mary or none of them were well– Springfield
<Page 2>
she reports as dull as usual– Uncle S– was to leave there on yesterday for Ky– Our little Eddy, has recovered from his little spell of sickness– Dear boy, I must tell you a little story about him– Boby in his wanderings to day, came across in a yard, a little kitten, your hobby, he says he asked a man for it, he brought it triumphantly to the house, so soon as Eddy, ^spied it^ his tenderness, broke forth, he made them bring it water, fed it with bread himself, with his own dear hands, he was a delighted little creature over it, in the midst of his happiness Ma came in, she you must know dislikes the whole cat-race, I thought in a very unfeeling manner, she ordered the servant near, to throw it out, which of course, was done–, Ed—screaming & protesting loudly against the proceeding, she never appeared to mind his screams, which were long & loud, I assure you– Tis unusual for her now a days, to do any thing quite so striking, she is very obliging & accommodating, but if she thought any of us, were on her hands again, I believe she would be worse than ever– In the next moment she appeared in a good humor, I know she did not intend to offend me– By the way, she has just sent me up a glass of ice cream, for which this warm evening, I am duly grateful. The country is so delightful I am going to spend two or three weeks out there, it will doubtless benefit the children– Grandma has received a letter from Uncle James Parker of Miss
<Page 3>
saying he & his family would be up by the twenty fifth of June, would remain here some little time & go on to Philadelphia to take their oldest daughter there to school, I believe it would be a good chance for me to pack up & accompany them– You know I am so fond of sight seeing, & I did not get to New York or Boston, or travel the lake route–3 But perhaps, dear husband, like the irresistible Col Mc, cannot do without his wife next winter, and must needs take her with him again– I expect you would cry aloud against it– How much, I wish instead of writing, we were together this evening, I feel very sad away from you– Ma & myself rode out to Mr Bell’s splendid place this afternoon, to return a call, the house and grounds are magnificent, Frances W would have died over their rare exotics– It is growing late, these summer eves are short, I expect my long scrawls, for truly such they are, weary you greatly– if you come on, in July or August I will take you to the springs– Patty Webb’s, school in L– closes the first of July, I expect Mr Webb, will come on for her, I must go down about that time & carry on quite a flirtation, you know we, Always had a penchant that way– With love I must bid you good night– Do not fear the children, have forgotten you, I was only jesting– Even E– eyes brighten at the mention of your name– My love to all–
Truly yoursM L–
<Page 4>
[endorsement]
. . . 200 to drive out on the Bedford road [on?] sunny day, . . . the Hudson take a drive feel . . . looks . . . house . . .
[endorsement]
arrive at . . . 500 . . . wait in . . .
[docketing]
Mrs Lincolns
Letter her husband
1Mary Lincoln wrote and signed the letter. The endorsements and docketing on the back page are in an unknown hand.
2Abraham Lincoln arrived in Washington to begin his congressional career on December 2, 1847, bringing his wife and two children in tow. Mary stayed in Washington until sometime prior to April, when she and the children returned to stay with her parents in Lexington, Kentucky.
Michael Burlingame, Abraham Lincoln: A Life (Baltimore: The Johns Hopkins University Press, 2008), 1:257; Jean H. Baker, Mary Todd Lincoln: A Biography (New York: W. W. Norton, 1987), 136-37, 141.
3Mary and the children returned to Washington sometime between July and September 1848. In September, they returned with Lincoln to Springfield, Illinois, via Niagara Falls and the Great Lakes.
Jean H. Baker, Mary Todd Lincoln: A Biography, 143.