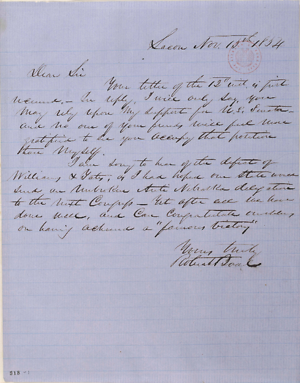 Robert Boal to Abraham Lincoln, 15 November 18541
Lacon Nov. 15th 1854 Dear Sir
Your letter of the 12th inst. is just received,–2 In reply, I will only say, you may rely upon my support for U.S. Senator— and no one of your friends will feel more gratified to see you occupy that position than myself.3
I am sorry to hear of the defeat of Williams & Yates, as I had hoped our state would send an unbroken Anti Nebraska delegation to the next Congress– Yet after all we have done well, and can congratulate ourselves on having achieved a "famous victory"4
Yours trulyRobert Boal
<Page >
[Envelope]
LACON Ills.[Illinois]
NOV[November] 17Hon, A.. LincolnSpringfieldIll
[docketing]
Lincoln, Abraham
Dr R. Boal5
[docketing]
Nov 15 54[1854]6
1Robert Boal wrote and signed this letter, including the address on the envelope.
2Abraham Lincoln’s November 12, 1854 letter to Boal has not been located.
3Boal references Lincoln’s candidacy for a seat in the U.S. Senate. Lincoln wrote several letters to political allies in November and December of 1854, seeking support for his candidacy and information about his prospects.
Passage of the Kansas-Nebraska Act and its effective repeal of the Missouri Compromise had reawakened Lincoln’s passion for politics, and he threw himself into the congressional election campaign in the fall of 1854, crisscrossing Illinois to deliver speeches against the Kansas-Nebraska Act and in support of anti-Nebraska candidates. He even allowed himself to become a candidate for the Illinois General Assembly (albeit unwillingly at first). As the election campaign reached its climax, Lincoln’s name began to circulate as a possible nominee for one of the state’s U.S. Senate seats.
Abraham Lincoln to Hugh Lamaster; Abraham Lincoln to Joseph Gillespie; Abraham Lincoln to Horace W. Fay; David Herbert Donald, Lincoln (New York: Touchstone, 1995), 167-73; Autobiography of Abraham Lincoln Written for John L. Scripps; William H. Randolph to Abraham Lincoln.
4Archibald Williams had run against Democrat incumbent William A. Richardson to represent Illinois’ Fifth Congressional District in the U.S. House of Representatives. Richardson retained his seating, winning 52.4 percent of the district’s votes to Williams’ 47.6 percent.
Similarly, Richard Yates had sought reelection to the U.S. House of Representatives as the representative for Illinois’ Sixth Congressional District. Thomas L. Harris, Yates’ Democratic opponent, defeated him by 200 votes. Harris garnered 50.5 percent of the vote to Yates’ 49.5 percent.
Despite these losses, the state’s voters sent an anti-Nebraska majority to the U.S. House of Representatives and the Illinois General Assembly. Boal and Lincoln both won seats in the Illinois House of Representatives. In late-November 1854, however, Lincoln declined to serve in order to run for the U.S. Senate. Boal wrote Lincoln another letter on December 7, 1854 on the subject. Ultimately, Lincoln did not win election to the U.S. Senate; the Illinois General Assembly selected anti-Nebraska Democrat Lyman Trumbull instead. Boal cast his vote for Lincoln on nine ballots before switching to Trumbull in the final ballot. See the 1854 Federal Election.
Howard W. Allen and Vincent A. Lacey, eds., Illinois Elections, 1818-1990 (Carbondale and Edwardsville: Southern Illinois University Press, 1992), 10; Green B. Raum, History of Illinois Republicanism (Chicago: Rollins, 1900), 316; Abraham Lincoln to Noah W. Matheny; Michael Burlingame, Abraham Lincoln: A Life (Baltimore: The Johns Hopkins University Press, 2008), 1:392, 401-2; John Clayton, comp., The Illinois Fact Book and Historical Almanac, 1673-1968 (Carbondale: Southern Illinois University Press, 1970), 220-21; Illinois Daily Journal (Springfield), 10 November 1854, 2:5; Stephen Hansen and Paul Nygard, “Stephen A. Douglas, the Know-Nothings, and the Democratic Party in Illinois, 1854-1858,” Illinois Historical Journal 87 (Summer 1994), 114; Illinois Senate Journal. 1855. 19th G. A., 242-55.
5Lincoln wrote this docketing.
6This docketing was written by an unknown hand.