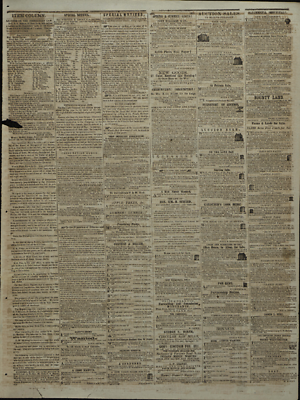 Related Document(s):
Thomas Moffett and Others to David Davis

David Davis to Thomas Moffett and Others, 10 April 18551
Bloomington, April 10, 1855.Gentlemen:—
I am in receipt of your favor, of the 30th ult., soliciting me to become a candidate for re-election to the office which I now hold.2
I am also in receipt of similar communications from other counties of the circuit.3
The unanimity of the bar in Springfield in making this request, and the approbation which they have been pleased to bestow upon my judicial course— is very gratifying to me.
The question of my longer continuance in office, has engaged my thoughts for some time past; and the near approach of the election rendering a decision necessary, has not lessened my reluctance [to mak]ing4 one.
[It would] be unprofitable to trouble you with the [conflicts in m]y own mind on the subject. As the result[– you ha]ve my assent to announce me as a candidate for re-election to the office of Judge of this Judicial Circuit.5
Most truly, your friend and ob’t.[obedient] servant,DAVID DAVIS.Messrs.[Messieurs] Moffett, Logan, Stuart and other members of the bar, Springfield, Illinois.
1This letter is attributed to David Davis, but no manuscript version with his signature has been located.
2The letter of March 30, 1855 from Thomas Moffett and other members of the Springfield bar to which this is a response was published with this letter.
Illinois Daily Journal (Springfield), 13 April 1855, 3:1.
3The counties which comprised the Eighth Judicial Circuit at this time were Champaign, DeWitt, Logan, McLean, Sangamon, Tazewell, Vermilion, and Woodford.
“An Act to Reduce the Limits of the Eighth Judicial Circuit, and to Fix the Times of Holding Courts Therein,” 3 February 1853, General Laws of Illinois (1853), 63-64.
4The original source text has a hole, making the text illegible. Here and below, the supplied text comes from the transcription in the April 14 edition of the Illinois Daily Journal.
Illinois Daily Journal (Springfield), 14 April 1855, 3:1.
5Following publication of this letter and that to which it responded, Davis’ candidacy for re-election as judge of the Eighth Judicial Circuit was announced in the press, and the election was held on Monday, June 4, 1855. Davis ran unopposed and won re-election with 1,170 votes.
Illinois Daily Journal (Springfield), 25 April 1855, 3:2; 4 May 1855, 3:2; Dewitt Courier (Clinton, IL), 8 June 1855, 2:1; The Weekly Rock Island Republican (IL), 4 July 1855, 3:3.