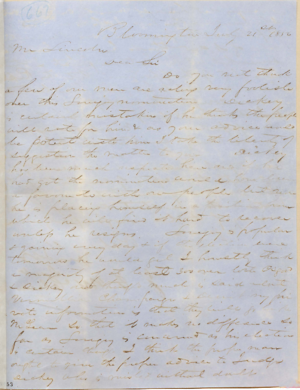 John E. McClun to Abraham Lincoln, 21 July 18561
Bloomington July 21st 1856Mr LincolnDear Sir
Do you not think a few of our men are acting very foolish over this Lovejoy nomination2Dickey is certainly mistaken if he thinks the people will vote for him & as your advice would be potent with him I take the liberty of suggestin the matter to you Dickey has been much respected here and if he had got the nomination would have been a favourite with our people but now he is placing himself in a position from which he will find it hard to recover unless he resigns3 Lovejoy is popular & gaining every day & if the election were tomorrow he would get I honestly think a majority of at least 300 over both Osgood & Dickey and though much is said about Vermillion Champaign & Dewit my private information is that they will go like McLean so that it makes no difference so far as Lovejoy is concerned as his election is certain though I think the proper man ought to give the proper advice to Judge Dickey who is mislead without doubt4
<Page 2>
Lovejoy did himself much credit at Springfield & there he is with us on the Republican Platform and is an able vindicator of it, and though he may have been somewhat ultra in time past5 I think he is glad of the opportunity that this Republican movement has given him to take a more conservative [shoot?] in politicks & I think he is going to be useful & successful Much feeling prevails in our country & constant accessions to our party I had no idea so much excitement prevailed till recently. I had felt the necessity of conciliating the few pro-slavery men that have always acted with us without knowing how many of the old Locofoco party were ready to join us.
Respectfully
Your obt Sevt[obedient Servant]J. E McClun
1John E. McClun wrote and signed this letter.
2Owen Lovejoy defeated Leonard Swett for the Republican nomination for U.S. representative in Illinois’ Third Congressional District in the 1856 Federal Election. Abraham Lincoln had backed Swett, fearful that Lovejoy’s connection with abolitionism would hurt the chances of a Republican winning the seat. Lincoln responded to Swett’s defeat in a letter to Henry C. Whitney: “It turned me blind when I first heard Swett was beaten, and Lovejoy nominated; but after much anxious reflection, I really believe it is best to let it stand.” Lincoln expressed similar sentiments in a letter to David Davis.
Mitchell Snay, “Abraham Lincoln, Owen Lovejoy, and the Emergence of the Republican Party in Illinois,” Journal of the Abraham Lincoln Association 22 (Winter 2001), 93.
3T. Lyle Dickey was nominated for Congress in the same district as Lovejoy, but on September 13, 1856, Dickey withdrew his name from consideration.
Avery N. Beebe, “Judge Theophilus L. Dickey and the First Murder Trial in Kendall County,” Journal of the Illinois State Historical Society 3 (January 1911), 49-50.
4In November 1856, Lovejoy won the general election, defeating Uri Osgood, the Democratic Party candidate, by 6,061 votes to become a part of the Thirty-Fifth Congress. Osgood won DeWitt County, but Lovejoy carried Vermilion, Champaign, and McLean counties with healthy majorities.
Mitchell Snay, “Abraham Lincoln, Owen Lovejoy, and the Emergence of the Republican Party in Illinois,” Journal of the Abraham Lincoln Association 22 (Winter 2001), 82-99; Howard W. Allen and Vincent A. Lacey, eds., Illinois Elections, 1818-1990 (Carbondale and Edwardsville: Southern Illinois University Press, 1992), 10, 139.
5Lovejoy, a seasoned abolitionist, focused on keeping anti-slavery at the forefront of the anti-Nebraska movement and the new Republican Party. In October 1854, Lovejoy was among the anti-Nebraska men who called for a state Republican convention to be held in Springfield on October 4 and 5 to coincide with the state fair. The delegates appointed a state central committee and chose Lincoln, who did not attend the meeting, as representative from Sangamon County. Lovejoy vouched for Lincoln’s support of the anti-slavery platform, but Lincoln, still clinging to his Whig Party allegiance and fearful of too close an association with abolitionism, refused to allow his name to be associated with the committee.
Mitchell Snay, “Abraham Lincoln, Owen Lovejoy, and the Emergence of the Republican Party in Illinois,” Journal of the Abraham Lincoln Association 22 (Winter 2001), 82-99; Arthur Charles Cole, The Era of the Civil War 1848-1870, vol. 3 of The Centennial History of Illinois (Springfield, IL: Illinois Centennial Commission, 1919), 128-29; Ichabod Codding to Abraham Lincoln; Abraham Lincoln to Ichabod Codding.