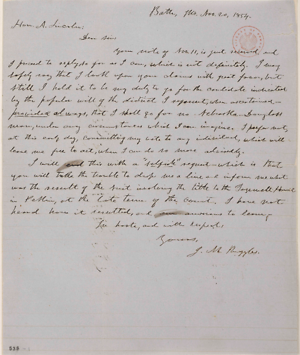 James M. Ruggles to Abraham Lincoln, 20 November 18541
Bath, Ill's. Nov. 20, 1854–Hon. A. Lincoln:Dear sir:
Your note of Nov.[November] 11, is just received,2 and I proceed to reply, so far as I can, which is not definitely. I may safely say that I look upon your claims with great favor, but still I hold it to be my duty to go for the candidate indicated by the popular will of the district I represent,3 when ascertained—provided always, that I shall go for no Nebraska-Douglass man,4 under any circumstances which I can imagine. I prefer not, at this early day, committing my vote to any individual, which will leave me free to act, when I can do so more advisedly.5
I will end this with a “selfish” request— which is that you will take the trouble to drop me a line and inform me what was the result of the suit involving the title to the Tazewell House in Pekin, at the late term of the court. I have not heard how it resulted, and am anxious to learn–6
In haste, and with Respect,
Yours,J. M. Ruggles.
<Page 2>
[Envelope]
BATH Ills[Illinois]
NOV 21Hon. A. Lincoln,SpringfieldIll's.
[docketing]
Lincoln, Abraham (President)
J. M. Ruggles7
[docketing]
Nov 20/54[1854]8
1James M. Ruggles wrote and signed this letter. He also wrote the address on the envelope, shown in the second image.
2Abraham Lincoln’s November 11, 1854 letter to Ruggles has not been located.
3Ruggles represented the seventeenth district in the Illinois Senate. District seventeen included the counties of Cass, Menard, Logan, Mason, and Tazewell.
Illinois Daily Journal (Springfield), 2 January 1855, 2:3; “An Act to Apportion the Senators and Representatives in this State in the General Assembly,” 27 February 1854, Laws of Illinois (1854), 4.
4Ruggles references candidates who supported the Kansas-Nebraska Act and Stephen A. Douglas. See the Kansas-Nebraska Act.
5Ruggles is discussing Lincoln’s candidacy for a seat in the U.S. Senate. Lincoln wrote several letters to political allies in November and December of 1854, seeking support for his candidacy and information about his prospects.
Passage of the Kansas-Nebraska Act and its effective repeal of the Missouri Compromise reawakened Lincoln’s passion for politics, and he threw himself into the congressional election campaign in the fall of 1854, crisscrossing Illinois to deliver speeches against the Kansas-Nebraska Act and in support of anti-Nebraska candidates. He even allowed himself to become a candidate for the Illinois General Assembly (albeit unwillingly at first). As the election campaign reached its climax, Lincoln’s name began to circulate as a possible nominee for one of the state’s U.S. Senate seats. When the votes were counted, he won election to the Illinois General Assembly. In late-November, however, he declined to serve in order to run for the U.S. Senate. Ultimately, he did not win election to the U.S. Senate; the Illinois General Assembly selected anti-Nebraska Democrat Lyman Trumbull instead. Ruggles cast his vote for Lincoln until the ninth ballot, when he switched to Trumbull. See the 1854 Federal Election.
Abraham Lincoln to Hugh Lamaster; Abraham Lincoln to Joseph Gillespie; Abraham Lincoln to Herbert W. Fay; David Herbert Donald, Lincoln (New York: Touchstone, 1995), 167-73; Autobiography of Abraham Lincoln Written for John L. Scripps; William H. Randolph to Abraham Lincoln; Michael Burlingame, Abraham Lincoln: A Life (Baltimore: The Johns Hopkins University Press, 2008), 1:392, 401-2; Illinois Daily Journal (Springfield), 10 November 1854, 2:5; Illinois Senate, Journal. 1855. 19th G. A., 1st sess., 242-55.
6Ruggles is referring to the case Snell v. Ludwig et al. In September 1852, Richard H. Snell sued Ruggles, William C. Ludwig, and Jesse Kneedler in a chancery action in the Tazewell County Circuit Court. Snell retained Lincoln, Edward Jones, Julius Manning, and Amos Lee Merriman; Ruggles, Ludwig, and Kneedler retained Benjamin S. Prettyman and Norman H. Purple. In September 1856, Snell motioned to dismiss the case, the court granted his motion, and Judge David Davis ordered Snell to pay all “costs and charges” that the defendants expended in their defense. Although few details about the case are known since extant historical records are limited, Snell v. Ludwig et al. could have been related to Snell v. Prettyman et al. and Prettyman v. Walston, a case that went all the way to the Illinois Supreme Court.
Decree, Document ID: 44054, Snell v. Ludwig et al., Martha L. Benner and Cullom Davis et al., eds., The Law Practice of Abraham Lincoln: Complete Documentary Edition, 2d edition (Springfield: Illinois Historic Preservation Agency, 2009), http://www.lawpracticeofabrahamlincoln.org/Details.aspx?case=136324; Snell v. Prettyman et al., Martha L. Benner and Cullom Davis et al., eds., The Law Practice of Abraham Lincoln: Complete Documentary Edition, http://www.lawpracticeofabrahamlincoln.org/Details.aspx?case=136325; Benjamin S. Prettyman v. Elizabeth Walston and Abraham Walston, 34 Ill. (Freeman) (1866), 175-92.
7Lincoln wrote this docketing.
8An unknown person wrote this docketing.