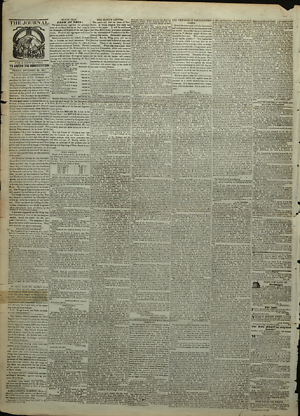 Related Document(s):
Anson G. Henry and Others to the Editor of the Sangamo Journal

Proceedings of Whig Meeting regarding Candidates for Governor and Lieutenant Governor, 22 November 1841
WHIG MEETING.
Pursuant to notice a meeting of Whigs was held in Springfield on Monday, Nov.[November] 22, 1841.1
JOHN LINDSAY, Esq.[Esquire], of Spring Creek was chosen Chairman, and Dr. S. B. Eaty of Athens, Secretary.
The subject of the meeting having been explained,
On motion, S. Francis, A. Lincoln and Wm. Porter were oppointed a committee to draft resolutions to express the wishes of the meeting.
The committee after a short recess reported the following preamble and resolutions:
Whereas, a State Whig Convention has been called to reconcile conflicting claims to the nomination of a Whig candidate for Governor; and whereas Col.[Colonel] Wm. H. Davidson has declined being a candidate for that office—leaving no other candidate before the people than Gen. Joseph Duncan—
Resolved, As the opinion of this meeting, that the necessity of holding a State Convention seems to be obviated, and that we will cordially unite in the support of Joseph Duncan for Governor of this State—but that on the subject of holding a State convention, as on all others connected with the interests of the Whig party and the maintenance of its principles, we will abide the decision of our friends in other portions of the State.
Resolved, That we respectfully suggest the name of Hon. JUSTIN HARLAN, of Clark county—late a Judge of the Circuit Court—as a suitable candidate for the office of Lieutenant Governor.2
Resolved, That the following named persons be delegates for this county to the State Whig Convention, provided it is deemed necessary to hold one: Wm. Caldwell, of Sugar Creek; S. B. Eaty of Athens; John Dawson, of Wolf Creek; H. Yates, of Island Grove; and A. Lincoln of Springfield.
The resolutions were unanimously adopted.
On motion, Resolved, That the Chairman and Secretary sign the proceeding of this meeting and that they be published in the Sangamo Journal.
JOHN LINDSAY, Chair’n.[Chairman]S. B. Eaty, Sec’ry.[Secretary]
1The Sangamo Journal had announced this meeting on November 5, 1841, with the stated purpose of electing delegates for a state Whig convention.
Sangamo Journal (Springfield, IL), 5 November 1841, 2:1.
2Whigs eventually agreed that no state convention was necessary, and they nominated Joseph Duncan for Governor and William H. Henderson for lieutenant governor. In the election of 1842, Duncan and Henderson would lose to Thomas Ford and his running mate John Moore.
John Moses, Illinois Historical and Statistical (Chicago: Fergus, 1895), 1:550; Sangamo Journal (Springfield, IL), 26 November 1841, 2:1; 10 December 1841, 2:1; 17 December 1841, 2:1; Theodore C. Pease, ed., Illinois Election Returns, 1818-1848, vol. 18 of Collections of the Illinois State Historical Library (Springfield: Illinois State Historical Library, 1923), 126, 129.

Proceedings of Whig Meeting regarding Candidates for Governor and Lieutenant Governor. [1841-11-22]. https://papersofabrahamlincoln.org/documents/D200286. The Papers of Abraham Lincoln Digital Library.