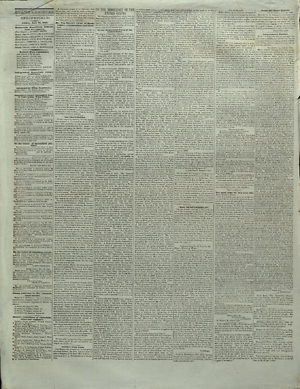 Summary of Remarks at Hillsboro, Illinois, in Response to Orlando B. Ficklin, 15 July 18431
When the great preacher of the “Kangaroo district,”2 commenced speaking, he had no apology to offer; no reason to give, why he had gotten into the shoes of the whig candidate of this pistrict, nothing to say of his hurried march from head quarters, or of the directions of the junto at Springfield;3 but without giving a single word to satisfy the public anxiety and curiosity on this point, went on to answer in a regular and systematic manner the speech of Mr. Ficklin. It was a little amusing to see how cautiously, this deputy and “spokesman” of the whig candidate in this district, came into the doctrine of the assumption of the State debts;4 endeavoring first to show that all the whigs were not for it; that it was not a question at issue; that he never had heard a speech on it before? and finally, that it was not a bad thing at any rate, and the people had better go for it. It is impossible to follow through his answer—but all were amused at the speech. The whigs, because it afforded them some good anecdotes to laugh at, some pester for their opponents, and a kind of relief from the exposition of the wrongs of their party, which Mr. Ficklin had just given; and the democrats were amused at the low intriguing manner in which the imported and transported deputy of the honorable Judge H. was brought here; and at the idea that the whigs were becoming so weak and feeble here, as to require a foreign emissary to revive the animation in their Clay tenements. And in the conclusion, it was still more amusing to see the boldness with which the foreign minister asserted that the bill holders of the late United States Bank of Pennsylvania, never lost any thing on the bills of that bank, and how he had to recede from that assertion afterwards; and also the bold and untrue assertion that Mr. Clay voted for Mr. Benton’s resolution against the assumption of the State debts in the Congress of 1839 and 1840.5
1This report was printed in the Democratic Illinois State Register as a letter to the editor from “A Democrat,” and is the only report of this speech that has been located. On July 15, 1843, the Democratic candidate for Congress in the Third Congressional District, Orlando B. Ficklin, gave a long policy speech as part of a scheduled campaign appearance at the Montgomery County Courthouse in Hillsboro, Illinois. Following Ficklin’s speech, Abraham Lincoln gave a rebuttal on behalf of the Whig candidate, Justin Harlan. At the election on August 7, 1843, Ficklin won the seat with 54% of the vote, garnering nearly 60% of the vote in Montgomery County.
Theodore C. Pease, ed., Illinois Election Returns, 1818-1848, vol. 18 of Collections of the Illinois State Historical Library (Springfield: Illinois State Historical Library, 1923), 137.
2Following the 1830 census, the Illinois General Assembly established three congressional districts. Sangamon County was in the third district, which was roughly composed of the counties in the northern third of the state. Following the 1840 census, Congress increased Illinois’ number of congressional districts to seven. On March 1, 1843, the General Assembly passed a law creating the new districts. The seventh district became a Whig stronghold, composed of Sangamon and ten other west-central Illinois counties: Tazewell, Putnam, Marshall, Woodford, Mason, Menard, Cass, Morgan, Scott, and Logan. “Kangaroo district” is likely a pejorative term referring to the newly created Congressional district.
“An Act to Lay out the State into Districts, for the Purpose of Electing Representatives to the Congress of the United States,” 15 February 1831, Laws of Illinois (1831), 70-71; “An Act for the Apportionment of Representatives among the Several States according to the Sixth Census,” 25 June 1842, Statutes at Large of the United States 5 (1856):491; “An Act to Establish Seven Congressional Districts,” 1 March 1843, Laws of Illinois (1843), 71-72.
3The “Springfield junto” was the name given to an informal group of Springfield Whig legislators and lawyers who dominated Illinois politics during this time period. Lincoln was a member of the junto.
Douglas L. Wilson, Honor’s Voice: The Transformation of Abraham Lincoln (New York: Vintage Books, 1999), 210-11; Michael Burlingame, Abraham Lincoln: A Life (Baltimore: The Johns Hopkins University Press, 2008), 1:161.
4Many state governments defaulted on their loans in the financial meltdown caused by the Panic of 1837. Whigs supported a proposition that the U.S. government assume the debts of the individual states following their default.
5December 27, 1839, Senator Thomas Hart Benton presented a set of resolutions to the U.S. Senate, including one declaring that the assumption of state debts by the national government was “unjust, unwise, impolitic, and dangerous.” On February 20, 1840, Henry Clay moved to indefinitely postpone consideration of the resolutions, but his motion was voted down. After much debate and amendment, the Senate agreed to the four resolutions on March 6, 1840, with Clay not voting on the question of passage.
U.S. Senate Journal. 1840. 26th Cong., 1st sess., 47-48, 192, 224-27.

Summary of Remarks at Hillsboro, Illinois, in Response to Orlando B. Ficklin. [1843-07-15]. https://papersofabrahamlincoln.org/documents/D200337. The Papers of Abraham Lincoln Digital Library.