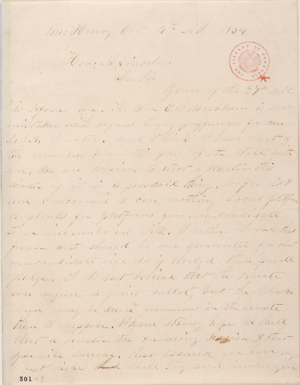 George Gage to Abraham Lincoln, 4 [December] 18541
McHenry Oct 4th AD 18542Hon: A. Lincoln;Dr Sir;
Yours of the 27th Ult is before me.3 The Hon E. B Washburn is not mistaken with regard to my prefferences for our USA. Senator, and I think I have most of the members from this part of the State with me.4 We are anxious to elect a senator this winter if it is a possable thing. So far as I am concerned I care nothing about platforms or planks for platforms for our candidate to be incumbered with. I rather choose that former acts should be our guarantee for what our candidate will do if elected than private pledges. I do not believe that the senate can refuse a joint ballot, but the Nebraska men may be [...?] ^more^ numerous in the Senate than I suppose. I have strong hopes we shall elect a senator the ensueing session & that you will succede.5 Rest assured you have my best wishes and ^I^ shall try and render you
<Page 2>
all the assistance I can. We are yet uncertain about the election in the 7th dist.[district]. I think it is, I really hope Archer is elected, but I fear not6
Respectfully yoursGeorge Gage
<Page 3>
[Envelope]
[McHEN?]
DEC[December] 5Hon; A Lincoln;SpringfieldIll
[docketing]
Lincoln, Abraham
George Gage–7
[docketing]
Oct[October] 4/54[1854]8
1George Gage wrote and signed this letter, including the address on the envelope.
2Gage dated this of October 4, 1854, but based on the postmark of December 5 and Gage’s discussion of the progress of the congressional election of 1854, it appears it should be dated December 4, 1854. Gage is apparently responding to a letter from Abraham Lincoln dated November 27, 1854, assessing Gage’s support of Lincoln’s candidacy for U.S. Senate. Lincoln wrote letters to several people in late-November soliciting support for his Senate candidacy and received responses to these inquiries in early December 1854. Lincoln wrote Elihu B. Washburne that he received a response from Gage about December 8, giving further credence to a date of December 4.
Abraham Lincoln to Thomas J. Henderson; Abraham Lincoln to Hugh Lamaster; Richard B. Servant to Abraham Lincoln; William H. Randolph to Abraham Lincoln; Robert Boal to Abraham Lincoln; John E. McClun to Abraham Lincoln; Thomas J. Henderson to Abraham Lincoln; Hugh Lamaster to Abraham Lincoln.
3Lincoln’s letter to Gage has not been found.
4Washburne wrote Lincoln on November 14 that Gage supported Lincoln for U.S. Senator.
5Passage of the Kansas-Nebraska Act and its effective repeal of the Missouri Compromise reawakened Lincoln’s passion for politics, and he threw himself into the congressional election campaign in the fall of 1854, crisscrossing Illinois to deliver speeches against the Kansas-Nebraska Act and in support of anti-Nebraska candidates. He even allowed himself to become a candidate for the Illinois General Assembly (albeit unwillingly at first). As the election campaign reached its climax, Lincoln’s name began to circulate as a possible nominee for one of the state’s U.S. Senate seats.
The state’s voters sent an anti-Nebraska majority to the Illinois General Assembly, in which Lincoln also won a seat. However, in late-November 1854, he declined to serve in order to run for the U.S. Senate. The Illinois General Assembly met in a joint session on February 8, 1855, to elect Illinois’s next U.S. Senator. Gage proved to be correct that in the first round of voting the majority of legislators from his neighboring counties in the northern portion of Illinois voted for Lincoln, including representatives from Boone, Carroll, Cook, Jo Daviess, Kane, Lake, McHenry, Ogle, Stephenson, Whiteside, and Winnebago counties, as well as senators from Kane, Stephenson, and Winnebago counties. The state senator from Cook County, Norman B. Judd, was an exception to this pattern, supporting instead his fellow anti-Nebraska Democrat Lyman Trumbull. For the first eight rounds of voting Gage himself also voted for Lincoln, but in the ninth round he switched his support to Trumbull. Trumbull won the senate seat on the tenth vote after Lincoln urged his remaining supporters to vote for Trumbull.
Stephen Hansen and Paul Nygard, “Stephen A. Douglas, the Know-Nothings, and the Democratic Party in Illinois, 1854-1858,” Illinois Historical Journal 87 (Summer 1994), 114; David Herbert Donald, Lincoln (New York: Touchstone, 1995), 167-73; Autobiography of Abraham Lincoln Written for John L. Scripps; Michael Burlingame, Abraham Lincoln: A Life (Baltimore: The Johns Hopkins University Press, 2008), 1:392, 401-2; John Clayton, comp., The Illinois Fact Book and Historical Almanac, 1673-1968 (Carbondale: Southern Illinois University Press, 1970), 220-21; Illinois Daily Journal (Springfield), 10 November 1854, 2:5; Illinois Senate Journal. 1855. 19th G. A., 242-55; Abraham Lincoln to Elihu B. Washburne.
6Whig candidate William B. Archer lost the race for U.S. Representative in the Seventh Congressional District to the incumbent Democrat James C. Allen by one vote and contested the election. Allen was forced to vacate the seat and a special election was held for the seat in 1856, which Allen won.
Howard W. Allen and Vincent A. Lacey, eds., Illinois Elections, 1818-1990 (Carbondale and Edwardsville: Southern Illinois University Press, 1992), 10, 135; Biographical Directory of the American Congress 1774-1996 (Alexandria, VA: CQ Staff Directories, 1997), 568-69.
7Lincoln wrote this docketing.
8An unknown person wrote this docketing.