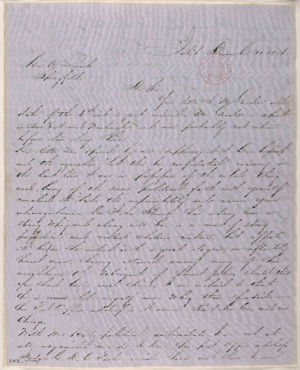 James T. McDougall to Abraham Lincoln, 11 December 18541
Joliet December 11. 1854Hon A LincolnSpringfieldDr[Dear] Sir
Your letter to Mr Goodell under date of the 6th inst is just received.2 Mr Goodell is absent in New York and Washington and will probably not return before three days hence.
His letter was opened by me (supposing it to be on business and the injunction "let this be confidential" occurring in the last line I am in possession of the whole thing and being of the same political faith with yourself conclude to "take the responsibility" and answer your interrogatories. Mr John Strunk has alway been a strong Whig and alway will be, is a man of strong prejudices and violent choleric nature, but affects to be (as he indeed is to a great degree) an inflexibly honest man, having attained among many of his neighbours the sobriquet of honest John, should think you had better write him. I am inclined to think he is more like myself more Whig than free soil— his Post Office address is Momence Kankakee Co. mail via Chicago.3
With Mr Hills political antecedents I am not at all acquainted nor do I know his post office address Judge G. D. A Parks resides here with him I am
<Page 2>
well acquainted and happen to know his predilection for U.S Senator though I do not feel at liberty to state them. I will state however that I do not think he is aware you are a candidate, and further that for many reasons his preference is not available at present Judge Parks was a Democrat this being the second time he has flown the track and been elected to office. He botched the regular nomination and was elected County Judge through the aid of the Whigs and is now elected to the legislature through the same influense aided by the anti-Nebraska pressure. Judge P. is a man of considerable ability and I have no doubt would be glad to hear from you, address Joliet4
With Mess[Messiuers] Strawn & Day I am but very slightly acquainted. Mr S is a Cattle dealer and farmer Mr Day is connected with the Bank of Peru. With my best wishes for your success and the assurance that yours to Mr Goodell shall be considered confidential I am 5
Yours Very RespectfullyJames T McDougall
<Page 3>
[Envelope]
Hon Abram LincolnSpringfieldIlls
[docketing]
C M R R
Dec[December] 11th6
[docketing]
Abraham Lincoln
J. T. McDougall–7
[docketing]
Dec 11 54[1854]8
1James T. McDougall wrote and signed this letter. He also wrote the address on the envelope.
2Abraham Lincoln’s letter to Roswell E. Goodell has not been located, but it was likely similar to others he wrote around that time requesting his allies’ help in canvassing their Illinois General Assembly members for support of his potential candidacy for a seat in the U.S. Senate. Passage of the Kansas-Nebraska Act and its effective repeal of the Missouri Compromise reawakened Lincoln’s passion for politics, and he threw himself into the congressional election campaign in the fall of 1854, crisscrossing Illinois to deliver speeches against the Kansas-Nebraska Act and in support of anti-Nebraska candidates. He even allowed himself to become a candidate for the Illinois General Assembly (albeit unwillingly at first). As the election campaign reached its climax, Lincoln’s name began to circulate as a possible nominee for one of the state’s U.S. Senate seats. In November and December 1854, Lincoln wrote confidential letters to his political allies seeking support for his candidacy and information about his prospects. The previous year, on November 1, 1853, Goodell had married Mary Jane Matteson, daughter of Governor Joel A. Matteson. Although Lincoln would not have known it at the time he wrote the letter, Goodell’s father-in-law had entered the Senate race and would vie for the same seat as Lincoln.
David Herbert Donald, Lincoln (New York: Touchstone, 1995), 167-73; William H. Randolph to Abraham Lincoln; Autobiography of Abraham Lincoln Written for John L. Scripps; Abraham Lincoln to Hugh Lamaster; Abraham Lincoln to Joseph Gillespie; Abraham Lincoln to Horace W. Fay; Will C. Ferril, ed., Sketches of Colorado (Denver: Western Press Bureau, 1911), 1:269; Tom George, “Overlooked Letter to Lincoln Reveals Misstep in 1855 Senate Race,” For the People: A Newsletter of the Abraham Lincoln Association 17 (Winter 2015), 7.
3No letter from Lincoln to John Strunk has been found. Strunk represented Kankakee County in the Illinois House of Representatives.
John Clayton, comp., The Illinois Fact Book and Historical Almanac, 1673-1968 (Carbondale: Southern Illinois University Press, 1970), 221.
4No letter from Lincoln to Gavion D. A. Parks has been found. Erastus O. Hills and Park represented Du Page and Will counties, respectively, in the Illinois House.
John Clayton, comp., The Illinois Fact Book and Historical Almanac, 1673-1968, 221.
5David Strawn and Frederick S. Day represented La Salle and Grundy counties, respectively, in the Illinois House.
Lincoln would be among the leading contenders when the General Assembly met in joint session on February 8, 1855, to elect a U.S. Senator. After ten ballots, anti-Nebraska Democrat Lyman Trumbull won the seat. See the 1854 Federal Election. Strunk cast his vote for Lincoln for six ballots, then switched his vote to Matteson. Hills shifted back and forth between Lincoln and Trumbull before settling on Trumbull in the eighth ballot. Parks cast his vote for Lincoln for six ballots, then switched to Trumbull on the eighth ballot. Strawn shifted his allegiance between Trumbull and William B. Ogden before settling on Trumbull. Day cast his vote for Lincoln and Martin P. Sweet before switching to Trumbull on the fourth ballot.
John Clayton, comp., The Illinois Fact Book and Historical Almanac, 1673-1968, 220; Illinois Senate Journal. 1855. 19th G. A., 242-55.
6An unknown person wrote this docketing.
7Lincoln wrote this docketing.
8An unknown person wrote this docketing.