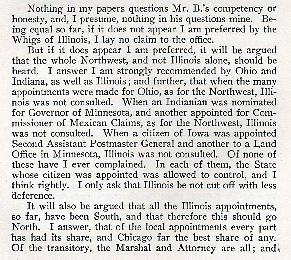 Abraham Lincoln to Zachary Taylor, [3 June 1849 - 21 June 1849]1
Nothing in my papers questions Mr. B.’s competency or honesty, and, I presume, nothing in his questions mine. Being equal so far, it does not appear I am preferred by the Whigs of Illinois, I lay no claim to the office.2
But if it does appear I am preferred, it will be argued that the whole Northwest, and not Illinois alone, should be heard. I answer I am strongly recommended by Ohio and Indiana, as well as Illinois; and further, that when the many appointments were made for Ohio, as for the Northwest, Illinois was not consulted. When an Indianian was nominated for Governor of Minnesota, and another appointed for Commissioner of Mexican Claims, as for the Northwest, Illinois was not consulted.3 When a citizen of Iowa was appointed Second Assistant Postmaster General and another to a Land Office in Minnesota, Illinois was not consulted.4 Of none of these have I ever complained. In each of them, the State whose citizen was appointed was allowed to control, and I think rightly. I only ask that Illinois be not cut off with less deference.
It will also be argued that all the Illinois appointments, so far, have been South, and that therefore this should go North. I answer, that of the local appointments every part has had its share, and Chicago far the best share of any. Of the transitory, the Marshal and Attorney are all; and
<Page 2>
neither of these is within a hundred miles of me, the former being South and the latter North of West.5 I am in the center. Is the center nothing?—that center which alone has ever given you a Whig representative?6 On the score of locality, I admit the claim of the North is no worse, and I deny that it is any better than that of the center.7
1In Abraham Lincoln: A Life, Michael Burlingame asserts that Abraham Lincoln wrote this appeal to President Zachary Taylor sometime after the second week in June 1849 while in Nathaniel G. Wilcox’s room in Washington, DC, but the editors found no source for this information. Joseph Barrett transcribed this letter in his book Abraham Lincoln and His Presidency, but provided no date for it. Roy P. Basler, editor of The Collected Works of Abraham Lincoln, gave the letter a tentative date of June 15, 1849, but without attribution. The editors date this document sometime between June 3, 1849 and June 21, 1849. In the document, Lincoln references the appointment of Isaac Leffler to the U.S. General Land Office in the Minnesota Territory, which he learned about in a letter Caleb B. Smith wrote him on June 3, 1849. Taylor appointed Justin H. Butterfield commissioner of the U.S. General Land Office June 21, 1849. See the General Land Office Affair.
Michael Burlingame, Abraham Lincoln: A Life (Baltimore: The Johns Hopkins University Press, 2008), 1:301; Joseph H. Barrett, Abraham Lincoln and His Presidency (Cincinnati: Robert Clarke, 1904), 1:107-8; Roy P. Basler, ed., The Collected Works of Abraham Lincoln (New Brunswick, NJ: Rutgers University Press, 1953), 2:54.
2Butterfield, James L. D. Morrison, and Cyrus Edwards were vying to become commissioner of the U.S. General Land Office. Lincoln entered the competition after learning that Butterfield was favored over Morrison and Edwards. See the General Land Office Affair.
3In the spring of 1849, Taylor nominated Edward W. McGaughey of Indiana for governor of the Minnesota Territory and Caleb B. Smith of Indiana for a position on the Mexican Claims Commission. The U.S. Senate rejected McGaughey, but confirmed Taylor’s next nominee, Alexander Ramsey of Pennsylvania, as governor of the Minnesota Territory. President Taylor established the Mexican Claims Commission in April 1849 to investigate claims of American citizens against Mexico in the aftermath of the Treaty of Guadalupe-Hidalgo. Smith served on the commission from 1849 to 1851.
Holman Hamilton, “Zachary Taylor and Minnesota,” Minnesota History 30 (June 1949), 104-8; John Bassett Moore, History and Digest of the International Arbitrations to Which the United States has Been a Party (Washington, DC: Government Printing Office, 1898), 2:1253-255; The American Almanac and Repository of Useful Knowledge for the Year 1851 (Boston: Charles C. Little and James Brown, 1851), 106; Sylvia B. Larson, "Smith, Caleb Blood," American National Biography, ed. by John A. Garraty and Mark C. Carnes (New York: Oxford University Press, 1999), 20:143-45.
4In 1849, Taylor appointed Fitz Henry Warren, who lived in Iowa at the time, assistant postmaster general. Warren served until 1852, when he resigned. In 1849, Taylor offered Isaac Leffler, who also lived in Iowa at the time, the position of register of the General Land Office in Stillwater, Minnesota Territory, but Leffler declined the appointment. Abraham Von Vorhes of Pennsylvania received the appointment instead.
Register of all Officers and Agents, Civil, Military, and Naval, in the Service of the United States, on the Thirtieth September, 1849 (Washington, DC: Gideon, 1849), 136, 1*; Historical Celebration of the Town of Brimfield, Hampden County, Mass. Wednesday, October 11, 1876 (Springfield, MA: Clark W. Bryan, 1879), 205; Biographical Directory of the American Congress 1774-1996 (Alexandria, VA: CQ Staff Directories, 1997), 1382.
5In 1849, Archibald Williams was U.S. district attorney for Illinois and Benjamin Bond was U.S. marshal for Illinois. Bond was a resident of Carlyle, Illinois, which is in southern Illinois, and Williams was a resident of Quincy, Illinois, which is northwest of Springfield, Illinois.
Register of all Officers and Agents, Civil, Military, and Naval, in the Service of the United States, on the Thirtieth September, 1849, 247.
6Central Illinois elected several Whigs to the U.S. House of Representatives in the elections of 1843, 1844, and 1846. John J. Hardin served in the Twenty-Eighth Congress, from March 4, 1843 until March 3, 1845. Edward Baker served in the Twenty-Ninth Congress, from March 4, 1845 until December 24, 1846, and in the Thirty-First Congress, from March 4, 1849 until March 3, 1851. Lincoln served in the Thirtieth Congress, from March 4, 1847 until March 3, 1849.
Biographical Directory of the American Congress 1774-1996 (Alexandria, VA: CQ Staff Directories, 1997), 607, 1159, 1395; Theodore C. Pease, ed., Illinois Election Returns, 1818-1848, vol. 18 of Collections of the Illinois State Historical Library (Springfield: Illinois State Historical Library, 1923), 141, 148, 159.
7Ultimately, neither Morrison, Edwards, nor Lincoln received appointment as commissioner of the U.S. General Land Office; the job went to Butterfield instead. See the General Land Office Affair.