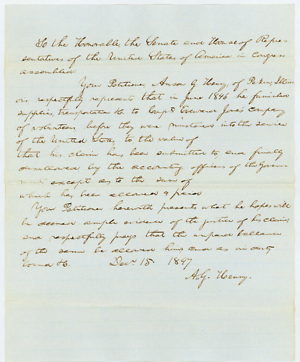 Related Document(s):
A Bill for the Relief of Dr. A. G. Henry, of Illinois
Report of Committee of Claims to U.S. House of Representatives regarding Petition of Anson G. Henry

Petition of Anson G. Henry to U.S. Congress, 15 December 18471
To the Honorable, the Senate and House of Representatives of the United States of America in Congress assembled:
Your Petitioner, Anson G. Henry, of Pekin, Illinois, respectfully represents that in June 1846 he furnished supplies, transportation &c.[etc.] to Capt[Captain] Edward Jones’ company of volunteers, before they were mustered into the service of the United States, to the value of that his claim has been submitted to, and finally disallowed, by the accounting officers of the Government, except as to the sum of which has been allowed & paid2
Your Petitioner herewith presents what he hopes will be deemed ample evidence of the justice of his claim: and respectfully prays that the unpaid ballance of the same be allowed him; and as in duty bound &c.3
Decr 15. 1847A.G. Henry.
<Page 2>
[docketing]
Petition of A.G Henry, praying reimbursment for expenses in supplying volunteers–4
[docketing]
Committee on claims–
[docketing]
12/20/1847
Decr[December] 20 1847. Referred to the Committee of Claims
[docketing]
12/29/1848
Feby[February] 29 1848 Bill 246
[docketing]
A. Lincoln
<Page 3>
[enclosure]
05/12/1847
McCalla, John M.Henry, Anson G.
Treasury Department.
Second Auditors Office
May 12th 1847Sir.
Enclosed you Will receive a Cert.[Certificate] No 4.202 for $30.52– Payable to your order by the Paymaster most convenient—being for Pay &c due him at the Rates of Captain of Cavalry for Services as Acting asst QrM. Comy[assistant Quartermaster and Commissary] of Cap.[Captain] ^Jones Co[Company] Ill. vol.[volunteers]^ under Joint Resolution of (8 Augt[August] 1846–) for 10th to 17th June 18465
Respectfully
Your obt[obedient] Servt[Servant]Jno M. McCalla
Second Auditor To Cap A. G. Henry.Pekin Ill.[Illinois]
<Page 4>
Treasury Dept[Department]
Official business
Jno M McCalla 2 aud[auditor]
FREE
[?]SHIN
[?] [2?]0 Capt. A. G. Henry of Illinois Vols Pekin Illinois
<Page 5>
[enclosure]
06/14/1847
Young, Richard M.Marcy, William L.
Washington City June 14. 1847Hon. William L MarcySecretary of War,Sir,
Enclosed I send you the papers of A. G. Henry Esq.[Esquire] of Pekin, Illinois, with the decision of Peter Hagner Esq, Third Auditor Adverse to the claim of Mr Henry, to the extent of the charges made by him against the Government.
In his behalf, I appeal from the decision of the Third Auditor, and request that Mr Henry’s accounts may be reexamined, and such relief afforded him as may be considered just and equitable under the provisions of the Joint Resolution of Congress approved March 3. 1847—which allows the Secretary of War to grant further relief, when it cannot be done by the laws & Regulations, which limit the discretion of the 3rd Auditor–6 You will see by an examination of the papers, the question of difference between the 3rd Auditor & Mr Henry–
I am very Respectfully &cRichard M Young
<Page 6>
[docketing]
Washn.[Washington] June 14. '47[1847]
Richd M. Young.
Appeals on a/c[account] of A. G. Henry for supplies furnished Ills[Illinois] vols[volunteers]–
[docketing]
03/03/1847
Res: 3 Mch[March] '47.
[docketing]
06/16/1847
Y26. Rec[Received] June 16/47
3d Auditor.
[docketing]
07/08/1847
Recd[Received] 8 July 1847
[docketing]
02/29/1848
Feb. 29, 1848
Bill 246
[docketing]
Mr Taylor
<Page 7>
[enclosure]
07/23/1847
Young, Richard M.Henry, Anson G.
Washington City July 23. 1847Dear Sir,
agreeably to your request, I presented your claim before the 3rd Auditor, and being satisfied that injustice had been done by the decision, I appealed to the Secretary of War, but with no better success. I now return the papers to you, in order that you may apply to Congress for relief. I think there can be no doubt, but that such an application would receive the attention it so justly merits.
If I can be of any service to you hereafter, in this or any other matter, do not hesitate to call upon me,
Your friendRichard M YoungDoct.[Doctor] A. G. HenryPekin. Ills
<Page 8>
[docketing]
Letter from Judge Young–
<Page 9>
[enclosure]
06/19/1846
^Waters^ (Copy.) ^3^
Report of the Third Auditor of the Treasury upon the claims of A. G. Henry, and Walden Porter for transportation, subsistence, &c., furniture ^shed^7 to Capt: Edward Jones’ Company of Col.[Colonel] E. D. Baker’s Regiment of Illinois Volunteer Infantry, from the 10th: to the 17th: of June 1846, prior, and up to the time of their arrival at Springfield Illinois, the place of G^g^eneral8 rendezvous, to be mustered into the service of the United States, for the prevention ^rosecution^9 of the War against the Republic of Mexico—transmitted for the action of the Accounting Officers, by the Quarter Master General on the 30th: ultimo.
The claims are as follows;
Camp Ford June 19. 1846.
[certification]
Jones, Edward
I certify that the above service was rendered–
Edward Jones Capt.
Compy.[Company] G. Illinois Volunteers
[certification]
Baker, Edward D.
I hereby certify that Capt. Jones commands Company G, as above and that the above certificate was executed by him—and I further certify that he had transportation for seventy seven men, but I do not certify as to price–
E. D. Baker Col
4th: Regt:[Regiment] Illinois Vols–
[enclosure]


Handwritten Document Signed with a Representation, 31 page(s), Tray 4, RG 233, Entry 367: Records of the United States House of Representatives, Thirtieth Congress, 1847-1849, Records of Legislative Proceedings, Petitions and Memorials, Resolutions of State Legislatures, and Related Documents Which Were Referred to Committees, 1847-1849, NAB.