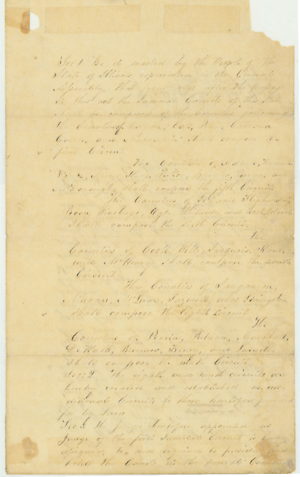 Sec[Section] 1 Be it enacted by the People of The State of Illinois represented in the General Assembly, That from and after the passage of this act the Judicial Circuits of this State shall be composed of the Counties following [:] The Counties ^of^ Morgan, Cass, Pike, Calhoun[,] Green, and Macoupin shall compose the first Circuit
The Counties of Adams, Hancock[,] Warren, Mercer[,] Knox, Fulton, Schuyler, Brown, and McDonough, shall compose the fifth Circuit.
The Counties of Jo Davis, Stephenson; Boon, Winebago, Ogle, Whitesides; and Rock Island, Shall compose the sixth Circuit.
The Counties of Cook, Will, Iroquois, Kane, and McHenry shall compose the seventh Circuit
The Counties of Sangamon, Macon, McLane, Tazwell, and Livingston shall compose the Eighth Circuit
The Counties of Peoria, Putnam, Marshall, De Kalb, Bureau, Henry, and Lasalle, shall compose the ninth Circuit
Sec: 2. The eighth and ninth circuits are hereby created and established as, additional Circuits to those heretofore provided for by Law
Sec 3 The Judge heretofore appointed as Judge of the first Judicial Circuit is hereby assigned to, and required to preside and hold the Courts in the several Counties
<Page 2>
composeing the Eighth Circuit created by this act, and released from discharging those duties in the Counties composing the first Circuit,1
Sec 4 There shall be elected ^appointed^ by Joint Ballot of both Branches of the General Assembly during the present session one ^4^ Circuit Judge for the ninth Circuit created by this act who shall be commissioned by the Governor as Circuit Judges of this State and shall hold this office during good behaviour, who shall be vested with all the powers confered, and required to perform all the duties imposed upon Circuit Judges of this State,
Sec: 5. The Judges of the fifth, sixth, and seventh Circuits heretofore appointed and assigned to said Circuits, shall preside and hold the Courts in the Counties of which said Circuits are composed as arranged by this act, and the Counties composeing the second, third[,] and fourth Circuits shall remain as heretofore provided by Law
[certification]
02/09/1839
Bond, Benjamin
Passed the Senate Feby 9. 1839
Benj Bond Secty[Secretary] Sen
<Page 3>
<Page 4>
[docketing]
No 132
[docketing]
√
[docketing]
Senate No 133
A, Bill For “an act dividing the State into Judicial Circuits
[docketing]
[01]/[25]/[1839]
2
[docketing]
[02]/[09]/[1839]
3
[docketing]
[02]/[23]/[1839]
Bond, Benjamin
To be Enrolled as amended
S[Secretary] S
[docketing]
[02]/[21]/[1839]
Rawalt’s motion [pending?]. H. R.
[docketing]
[02]/[21]/[1839]
Com[Committee] Judiciary H R
[docketing]
[02]/[23]/[1839]
passed as amended
[docketing]
[02]/[07]/[1839]
Engrossed
[docketing]
[02]/[09]/[1839]
Passed
1On the motion of Archibald Williams, the House voted on February 21. 1839, to strike this section from the act.
Illinois House Journal. 1838. 11th G. A., 1st sess., 474.