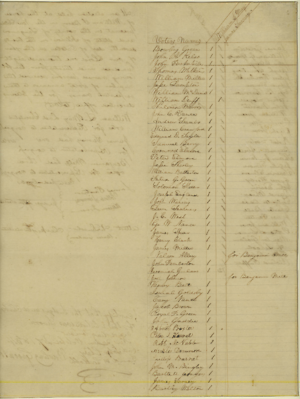 Election Returns for the New Salem Precinct in Sangamon County, Illinois, 27 October 18341
[certification]
Pantier, JamesSimmons, Pollard
At an election held at the house of William F Berry in the New Salem precinct in the county of Sangamon and state of Illinois on the twenty seventh day of October in the year of our Lord one thousand eight hundred and thirty four— the following named persons received the number of votes annexed to their respective names for the following described office (to Wit)
William L. May had Seventytwo votes for Representative to congress
James Turney had one vote for Representative to congress
Benjamin Mills had three votes for Representative to Congress
certified by us
[certification]
Lincoln, Abraham (President)Graham, Mentor
[certification]
10/27/1834
Green, Bowling
I certify that the Judges and Clerks of this Election was Sworn according to Law
New Salem October 27, 1834
and John Clary Served as Constable
Bowling Green J. P.[Justice of the Peace]
1Acting as Clerk of the election, Abraham Lincoln wrote the entirety of this document, including the two certifications. Each election judge and clerk signed his own name.
Illinois’ 1818 constitution provided for state elections to be conducted viva voce, in which a voter would present himself in person to the election judges and declare his votes publicly. An election official would record the votes in a poll book. In 1819, the First General Assembly reversed this provision in favor of voting by ballot. The legislature mandated a return to viva voce in 1821, ballots in 1823, viva voce again in 1829, and finally settled on ballots in 1849.
Ill. Const. (1818), art. 2, §28; Sec. 13 of “An Act Regulating Elections,” 1 March 1819, Laws of Illinois (1819), 93; Sec. 5 of “An Act Regulating Elections,” 3 February 1821, Laws of Illinois (1821), 75-76; Sec. 14 of “An Act Regulating Elections,” 3 January 1823, Laws of Illinois (1823), 57; Sec. 10 of “An Act Regulating Elections,” 10 January 1829, Revised Laws of Illinois (1829), 57; Sec. 13 of “An Act to Provide for the Mode of Voting by Ballot, and for the Manner of Returning, Canvassing and Certifying Votes,” 12 February 1849, Laws of Illinois (1849), 73.
2There were two men named John Martin living in this area during this time. Either of them could have been this voter.
3Someone other than Lincoln wrote Potter, Jones, and Carter’s names.
4Someone other than Lincoln wrote Cyrus Kerby’s name.
5There were two men named William Jones living in this area at this time. This could person could have been either of them.
6This special election was held to fill the vacancy left by Joseph Duncan, who was elected governor on August 4, 1834. Duncan resigned from the House of Representatives on September 21. In Sangamon County, 534 persons cast ballots. William L. May received 480 votes, Benjamin Mills 48, James Turney 1, Andrew Jackson 1, and David Dickinson 4.
Theodore C. Pease, ed., Illinois Election Returns, 1818-1848, vol. 18 of Collections of the Illinois State Historical Library (Springfield: Illinois State Historical Library, 1923), 100.