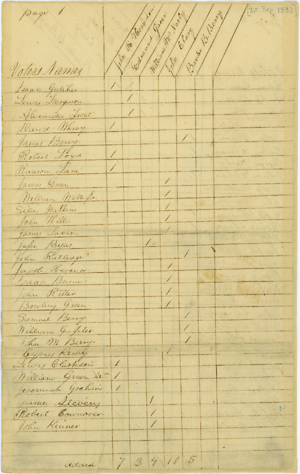 Election Returns for the New Salem Precinct in Sangamon County, Illinois, 20 September 18321
page 1
<Page 2>
page 2.
<Page 3>
page 3
<Page 4>
page 4.
<Page 5>
<Page 6>
<Page 7>
[docketing]
Election Returns
Constable
New Salem,
Special Election3
<Page 8>
[certification]
Rutledge, JamesArmstrong, Hugh M. White, James
At an election held at the house of John McNeil in the New Salem precinct in the County of Sangamon and State of Illinois on the 20th day of September in the year of our Lord one thousand eight hundred and thirtytwo the following named persons received the number of votes annexed to their respective names—for Constable—
John Clary had Forty one Votes for Constable
John R. Herndon had Twentytwo votes for constable
William McNeely had Thirteen votes for constable
Baxter B. Berry had Nine— votes for constable
Edmund Greer— had Four votes for constable
[certification]
Lincoln, Abraham (President)Green, William G.
Attest
[certification]
09/20/1832
Green, Bowling
I certify that the above Judges and clerks were qualified according to lawBowling Green J P[Justice of the Peace]4September 20— 1832
1Abraham Lincoln, acting as Clerk of the election, wrote the entirety of this document, except for the signatures of the other men.
Illinois’ 1818 constitution provided for state elections to be conducted viva voce, in which a voter would present himself in person to the election judges and declare his votes publicly. An election official would then record the votes in a poll book. In 1819, the First General Assembly reversed this provision in favor of voting by ballot. The legislature mandated a return to viva voce in 1821, ballots in 1823, viva voce again in 1829, and finally settled on ballots in 1849.
Ill. Const. (1818), art. 2, §28; Sec. 13 of “An Act Regulating Elections,” 1 March 1819, Laws of Illinois (1819), 93; Sec. 5 of “An Act Regulating Elections,” 3 February 1821, Laws of Illinois (1821), 75-76; Sec. 14 of “An Act Regulating Elections,” 3 January 1823, Laws of Illinois (1823), 57; Sec. 10 of “An Act Regulating Elections,” 10 January 1829, Revised Laws of Illinois (1829), 57; Sec. 13 of “An Act to Provide for the Mode of Voting by Ballot, and for the Manner of Returning, Canvassing and Certifying Votes,” 12 February 1849, Laws of Illinois (1849), 73.
2This voter could be Lewis Ferguson, Sr. or Lewis Ferguson.
3This election might have come about in response to a petition, dated July 20, 1832, for a constable to replace William Constant, who had resigned. The original petition is located in the Abraham Lincoln Presidential Library.
Petition of Citizens of Sangamon County, 20 July 1832, Sangamon County, Illinois County Commissioners’ Court, SC 1333-A, Folder 1, Manuscripts, Abraham Lincoln Presidential Library; Illinois State Historical Library, Trustees Report, 10 December 1892 (Springfield: H. W. Rokker, 1893), 16.
4Lincoln wrote this endorsement and the dateline; Bowling Green signed his own name.